A progression vector is a mechanic that offers a player the opportunity to continually improve within a given game. Common progression vectors include systems for gaining ‘experience points’ that have some value in a game, and levelling-up systems that allow users to reach new status levels throughout a game while unlocking improved abilities. 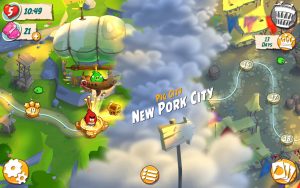 The Angry Birds 2 “saga map”: The game rewards a player with access to a new region.

Another model of progression vector that has become an increasing mainstay of free-to-play game design is the ‘saga map’. A saga map essentially offers a simple map that provides the player with a visual guide to their progress through a game. This is usually approached by the illustration of a simple path through a heavily stylised map, with levels marked as nodes along that path. Such maps can be visually designed so as to suggest progress through different themed zones, and movement into new areas of a game.

Progression vectors are important in rewarding the player and act as a yard stick for progression. They essentially serve as means to engage and retain players, encouraging them to keep playing. In addition the frustration of a progression vector (e.g. a timer or a difficult level) can be a key point for monetisation.