Beyond game design itself, there is perhaps no more vital effort in making a game successful than that of user acquisition.

After all, retaining and engaging players only begins when you have people downloading and playing your game. The notion of acquiring users in reality includes any way players find your game, including organic and word-of-mouth installs.

In this piece, however, we’ll be looking at formal and carefully planned UA approaches and processes that look to proactively find and secure more users for your game.

The art of user acquisition requires considerable effort analysing data, fine tuning content, A/B testing and understanding and implementing LTV models – the latter of which we covered in a devoted post that this piece follows up. Acquiring users is a daily effort. Another reality is that quality UA for free mobile games requires a budget. And that’s what we’ll really consider here – how to build a reliable approach that accounts for the realities and time frames of the movement of budget and revenues with regard to paid user acquisition.

Because what you spend today won’t be reimbursed immediately. It typically takes one-to-12 months – and sometimes more, depending on your game – to see a return.

Ultimately, hitting the right beats with your UA strategy means carefully planning and balancing budget, capacity, timeframe and any other operations your team or studio has underway.

It all starts with your opening budget, of course, but it is a little more complex than laying down a flat rate and waiting for paying users to come pouring in.

Before we tuck into the finer detail of plotting impactful UA that delivers results without undermining studio cashflow, it’s worth highlighting the fact that there is a difference between users spending money in your game, and that revenue appearing in your bank balance. Apple and Google insist on 40-to-60-day payment terms, which means that money generated on September 1st will arrive in late October to early November. Facebook and ad platforms typically offer similar terms, so do bear that in mind.

Understanding the LTV Curve
Assuming that you have a live game that you want to bolster with a paid UA effort – and that the game has good metrics and a positive ROAS (‘Return on Ad Spend’) – is that UA money spent today will take a while to come back to your bank account.

Every game, meanwhile, will have a different LTV curve, and no two LTV curves are the same resulting in different cashflow scenarios. Games that recoup quicker, such as hypercasual games, will require less cashflow than MMO games that keep players for years and have long ROAS periods. There’s plenty more to learn about understanding and modelling LTV in my previous article here on the Department of Play blog. 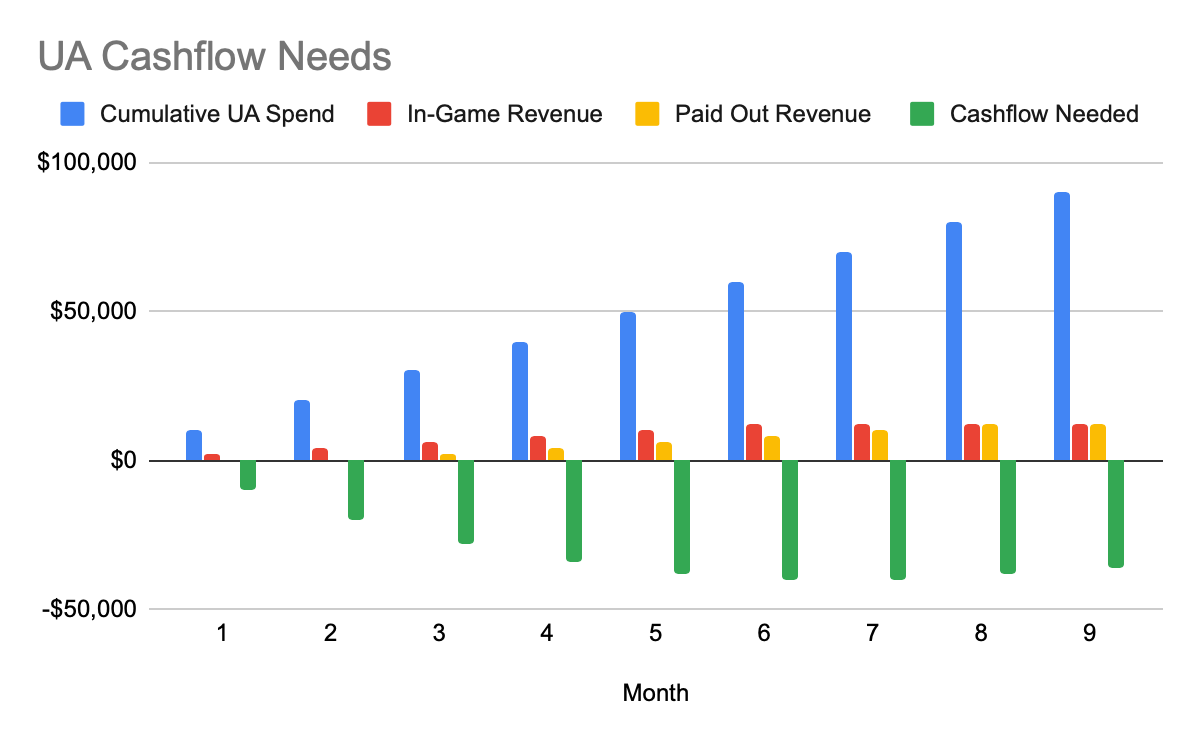 You may already be able to see where this is going.

The above example plainly demonstrates how carefully you need to consider your cash flow projections to finance your UA. You should assume any money spent today won’t come back for a while. As such, your model needs to have a continual cycle built in to assure that you know what money you spend today on UA, and how much will come back in any given month in revenues.

If the cycle is plotted over a rough six-month period, as per the example above, then you need to have that built into your forecasts. You also need to consider organic revenues when preparing your studio’s cash flow forecasts. This may be key for all of your overheads, but could help manage the UA needs too, even if not entirely.

Essentially, having a robust financial model is key to working out the UA funding you will need. The model should be built with monthly forecasts, and allow you to toggle between scenarios, so that you can stress test different assumptions. These could be longer payback cycles, higher organic revenues, different CPIs and so on.

The model will give you a structure to be able to work out the size of the funding you need.

You will be able to calculate the point at which UA cycles repeat themselves, and therefore how much funding you will need for the first few months.

Let’s look at a more detailed example – albeit one using arbitrary numbers.

First, let’s look only at cashflowing from a single initial investment of $10,000 and reinvesting the revenue from the game:

We can see that although the game has a positive ROAS, the money tied up in the game cannot be reinvested and results in slow growth, with $17,200 total revenue over 9 months from an initial $10,000 investment.

Instead what happens if the same game can be ‘cash flowed’ such that we can spend $10,000 on UA per month?

n the above scenario, looking at the UA element only, the funding needs would be $40,000 with a total revenue of $78,000. The benefits of the UA spend will come good in time, and this is only a made-up scenario, but you can see the planning involved – and required if you want to meet and manage your potential success.

Short of having access to a towering personal fortune, you will have to think carefully about how you fund your UA. A large number of mobile companies will use a combination of equity funding and debt funding.

Equity funding is best for risky, long term projects like building a software platform or designing and building a game. Debt funding, meanwhile, is ideal for shorter term ‘projects’ where the payback cycle is short, but predictable and lower risk.

UA funding fits into the latter perfectly – short term, relatively predictable and doesn’t require giving away a chunk of your business to fund it.

But as we’ve seen here, perhaps most important is preparing for – and planning around – the lag between UA spend, return on that investment, and the money actually landing in your business’ bank account. You’ll need to consider the nuance of your game, understand your LTV curve, and build a considered financial model, as described above. But it is entirely doable, even for a team without the resources to employ the likes of devoted UA managers.

Plan carefully, and you won’t just ramp up the potential success of your game through committing funds to UA – you’ll equally be able to better harness that success to grow your business, bolster your team and make your next project thrive.

Sugar is a financing platform for the digital economy, created to provide capital to games and app studios with exciting growth ambitions. Sugar’s range of flexible loans and products can significantly boost studio growth without taking any equity away from the founders. Sugar provides funds quickly and painlessly, so you can focus on running your business and smooth out any cashflow speedbumps along the way.

Matt is the CEO & Co-Founder of Sugar. After 16 years in investment banking at JPMorgan and Credit Suisse, Matt moved in to digital finance, specifically within the games ecosystem. He launched Sugar from the ground up, and is passionate about offering quick and easy finance to one of the highest growth and most exciting industries in the world.

Will Freeman is a freelance video game journalist, editor, copywriter, consultant, and event curator, having served and covered the game industry for over 15 years. Having worked with The Guardian, The BBC, BAFTA, Edge, Ukie, Tiga, Vice, GamesIndustry.biz, PocketGamer, MCV, Develop and more, he is also a devotee of arcade gaming, technology and culture, a published author, and a competitive yo-yoer.

Author: Matt Frenchman and Will Freeman