4 Predictions for Hypercasual in 2019

Just when the mobile F2P market was threatening to get stale, along came hypercasual. As the star of 2018 with Zynga snapping up Gram Games for $250m and Voodoo raising $200m from Goldman Sachs, where does the genre go next? Here’s my key predictions for 2019.

Hypercasual is predicated off buying users low and selling them high, effectively acting as advertisement arbitrage. Some of Voodoo’s games have CPI (Cost Per Install) as low as $0.15, which considering an average casino CPI sits at $7 today is very cheap. 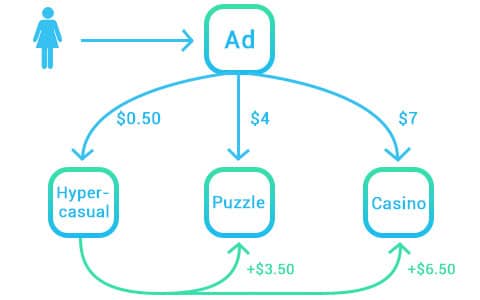 Buy for a penny, sell for a pound: How advertising arbitrage works.

Hypercasual games can find these low CPIs due to three factors:

As the novelty wears off and audiences become jaded then hypercasual players will become harder to convince to click ads. Plus as competitors enter with more refined games, and more willing to compete on margin, so bids will increase. The outcome is higher CPIs.

And higher CPIs will change the hypercasual game for everyone.

2. Big Players Will Attempt Cut Out the Middle Men 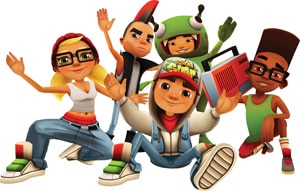 Could Kiloo create a hypercasual network around Subway Surfers?

A way to combat a rising CPI is to employ a strong market differentiator. License are time-proven to help with the user acquisition struggle, as indicated by Jam City striking a continued deal with Disney. And who has great IPs and license? The companies at the top of CPI chain.

We’ve already seen Zynga and Ubisoft buy up the middle man with Gram Game’s and Ketchapp’s acquisitions (respectively). But I anticipate that a major publisher with strong IP will instead attempt to cut out the middle man with build their own hypercasual network.

Will they be successful? That I’m unsure off, but I confident someone will try (albeit quietly).

As production values creep up, these simple graphics won’t convert users as well.

Right now hypercasual games look a little… Shitty. While embracing Minimum Viable Product and iterating quickly is smart in any genre in mobile, the M in MVP is moving rapidly. This rise in production quality will come from maturing games refining their app store CTR (click-through rate) to fight their rising CPIs. Better looking, feeling and playing games simply get more downloads.

A leading indicator in this trend is a move from simple blocks and dots graphics (e.g. Snake VS Block) to full 3D with characters and worlds (e.g. Hole.io and Stack Jump). While this graphical finesse trend will continue, expect to see the same with responsiveness and stability which impact Google Play’s search rankings.

Also, we’ve yet to see strong brands emerge from the genre, but I suspect this will happen. Already we’re beginning to see movement away from anonymous 2048-style graphic design (e.g. Helix Jump and Don’t Touch The White Tile) towards more distinction. The advantage of branding is not just market differentiation, but longevity through sequels and spinoffs. While Chimpworks‘ Baseball Boy is not the strongest character to carry a franchise, it is glimpse at a potential future for hypercasual.

4. Games Will Get More Complex

If there is one defining factor about hypercasual it is simplicity. But as CPIs rise and so the demand on per player revenue, then keeping and monetising players becomes increasingly important. A large factor of revenue is down to progression vectors. Progression vectors are mechanics that keep players coming back and spending with in-app purchases, which will become ever more important in that CPI recoup. However, progression vectors add lots of complexity.

In developing genres this adding of complexity is counterbalanced by maturing audiences who are well versed in existing mechanics and more willing to invest time. So players in fact demand more complexity and in hypercasual we’ve seen the following progression:

This evolution follows videogame history where early score attack games (e.g. 1977’s Space Invaders) gave way to level-based games (e.g. the maze levels of 1980’s Pac-Man) and then character levelling (1981’s Ultima I). And we will see more mature progression vectors being wrapped around the simple hypercasual core gameplay in 2019. This means that the next generation of hypercasual games are ones where the core can support upgrading and improvements, such as faster cars, more powerful bats and longer jumps, while still retaining pick-up-and-play appeal.

Progression vectors also allows for more effective incentivised adverts that reward the player: For example when a player levels up they are invited to watch an advert to gain an extra level. Incentivised adverts are opt-in rather than forced like interstitials, so result in more engaged and click-happy players that are less likely to quit the game at that moment.

If I were start a new hypercasual studio in 2019, I would make the following my product pillars:

However, predicting trends in games is alway fraught with danger as the unexpected has littered its history. I’m relatively confident on two points: CPIs will increase and hypercasual will change because of it. These four predictions are where my logic takes me and how best to get ahead. However, whatever route you take I think the battle for hypercasual is far from won, so 2019 is going to be an exciting year in the space.